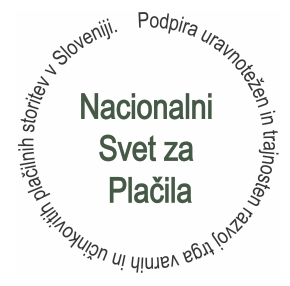 The ninth meeting of the National Payments Council (NPC; Nacionalni svet za plačila) was held at the Bank of Slovenia on 21 December 2017. A significant portion of the meeting was devoted to discussion of the provision of secure payment services and the NPC’s activities in informing payment service users of new developments in payments, the associated risks and the options for safeguarding against them. The NPC also discussed the importance of communications between payment service providers and users within the framework of the debate surrounding the NPC’s vision for the development of the payment services market in Slovenia.

The NPC, which brings together stakeholders in the payment services market, is aware that the key to introducing innovations in the payment services market is building positive user experiences, thereby ensuring that users (consumers and firms in Slovenia) have the highest possible level of confidence in payment services, and are as well-informed as possible. For the purposes of informing and educating payment service users, the NPC has had a working group in place since July 2017 for dealing with issues relating to payments security, in particular with the aim of ensuring uniform communications by payment service providers in the area of payments security for users. In accordance with the new Payment Services Directive (the PSD2), a resolution was passed at the NPC meeting in connection with informing users about new payment services (payment order services, and account information services) whereby a non-technical press release would be drafted by the aforementioned working group.

For the NPC to be able to function more effectively and to attain the objectives set out by the Decision on the establishment of the National Payments Council, its members also discussed the vision for its future work. Given the pace of developments in the payments market, and the growing importance of effective means of payment to the economy and to society as a whole, the following were identified as key elements of the vision:

Common to all of the aforementioned priorities are supporting the balanced and sustainable development of the market for secure and efficient payment services in Slovenia, contributing to its smooth functioning, and ensuring its adaptation to changes in the international environment. It is all aimed at providing Slovenian consumers and firms with a positive user experience in the general area of payments, thereby encouraging the adoption of new payment services and means of payment, and consequently contributing to the development of a competitive, cohesive, effective and secure payments market in Slovenia.

Members of the NPC were also briefed at the meeting on the process for adopting the draft Payment Services, Electronic Money Issuance Services and Payment Systems Act, which will transpose the PSD2 into Slovenian law and is expected to enter into force in early 2018. Members of the NPC were also briefed on the newly established European Forum for Innovation in Payments, which brings together representatives of bodies dealing with payments-related issues at the European Union level, such as the NPC in Slovenia.  Participating in the forum has given the NPC the opportunity to present the (joint) views of stakeholders in the Slovenian payments market, and thus the chance to have an influence on decisions taken at the European level.

Members of the NPC were again briefed on the slow migration of Slovenian issuers of UPOs with optical character recognition (OCR) to the UPN QR form, which has been in force since 3 April 2017. The NPC is therefore again encouraging UPO issuers to change over more quickly to the new form, with the aim of completing the migration by no later than the end of the envisaged one-year period, namely by 3 April 2018. In addition the NPC is warning issuers and printers of the UPN QR form of the necessity of correctly recording the QR code on the UPO, as an incorrect QR code can make it impossible to execute the payment, creating a negative experience for users of the UPN QR form and further slowing the progress of the migration.

The support material that was discussed at the ninth meeting of the National Payments Council is available on the Bank of Slovenia website (in Slovene only).