Press release: Publication of the non-performing exposures of banks and savings bank according to the new harmonised definition of the European Banking Authority (EBA)

Due to different practices in Member States, the European Banking Authority (EBA) set out a harmonised definition of non-performing and forborne exposures in the Single Rulebook for the purpose of reporting on a consolidated basis, as published in Commission Implementing Regulation (EU) No 2015/227 (Official Journal of the EU, No 48/2015 of 20 February 2015).
Taking into account the new harmonised definition and with the aim of monitoring and effectively managing risks, the Bank of Slovenia prescribed the quarterly reporting of such information on an individual basis for all banks and savings banks. The banks and savings banks reported their non-performing and forborne exposures according to the new definition on individual basis for the first time as at 30 June 2015.

Differences in the definition

The Bank of Slovenia currently reports on a monthly basis (in the monthly publication Performance of the banks in the current year, developments on the capital market, and interest rates; only in Slov. lang.) information on the amount and ratio of banks’ claims more than 90 days past due in total classified claims. According to situation as at 30 June 2015 the proportion of such claims stood at 10.2% or EUR 3.54 billion at the banking system level.

The EBA’s definition of non-performing exposures is broader as, in addition to material exposures more than 90 days past due, the numerator of the indicator of the proportion of non-performing exposures includes exposures that meet the “unlikely to pay” criterion. The majority of the latter are forborne exposures, i.e. exposures for which a change in the repayment schedule (as the result of the inability to repay debt under the conditions prior to that change) does not result in arrears of more than 90 days, and for which that change has resulted in or is likely to result in the material forgiveness of a debtor’s debt.

The EBA’s definition also expands the scope of exposures included in the denominator of non-performing exposures ratio (EUR 42.0 billion compared with EUR 35.8 billion). In addition to the previously included financial assets measured at amortised cost (loans and debt securities) and (irrevocable) off-balance-sheet commitments based on which a payment liability could arise for a bank, the denominator of the aforementioned ratio also includes financial assets measured at fair value other than held for trading, and loan commitments given (from off-balance-sheet).

Table: Information on the banking system’s non-performing exposures on an individual basis as at 30 June 2015 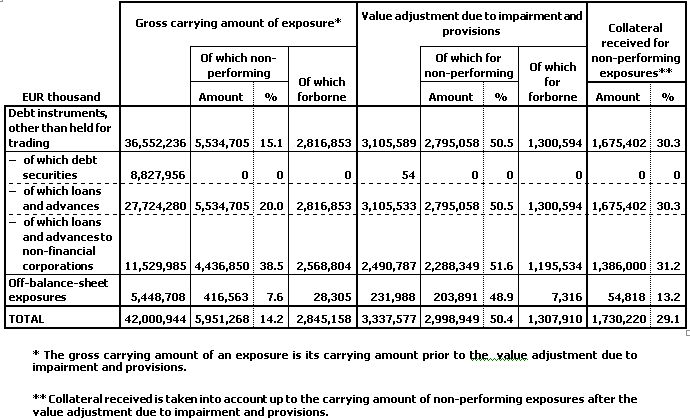