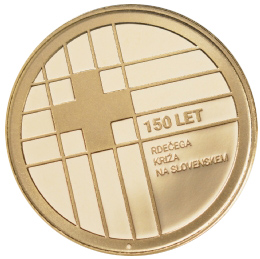 The beginnings of the Red Cross in Slovenia came in 1866, when the Women’s Society for Aiding Injured and Sick Soldiers and Widows and Orphans of Fallen Soldiers was founded, followed by the Men’s Society for Supporting and Serving Injured and Sick Soldiers in 1879. The two societies merged in 1902, and acted as part of the Austro-Hungarian Red Cross. They collected money and other contributions, and were active in the areas of health, law and accounting. Above all they worked on humanitarian causes (free kitchens, hospitals, clothes collections, etc.) during wartime and peacetime alike.

The Slovenian Red Cross was founded on 18 June 1944, in the liberated territory of Gradac in Bela Krajina. It is an independent, humanitarian organisation of national import, organised as a single society active in 12 regions with more than 14,000 volunteers. The Slovenian Red Cross carries out a range of tasks under public authorisation, such as organising blood donation, conducting first aid training, providing aid to the socially disadvantaged, and preparing for and responding to natural and man-made disasters. It acts in accordance with the seven fundamental principles of the Red Cross movement: humanity, impartiality, neutrality, independence, voluntary service, unity and universality. It is a member of the International Red Cross and Red Crescent Movement, and is dedicated to using the power of humanity to improve the lives of vulnerable people, in conjunction with national organisations and other humanitarian, health and social organisations at home and abroad.

In its 150 years of history the Slovenian Red Cross has made a significant contribution to improving the quality of life of countless families and individuals in distress, irrespective of race, gender, language, faith or other beliefs.

To mark the 150th anniversary of the Red Cross in Slovenia, the Republic of Slovenia is issuing collector coins whose main motif is a net carrying the symbol of the organisation, i.e. a cross. The net motif signifies the actions and support of the organisation, which is largely supported by the work of volunteers. 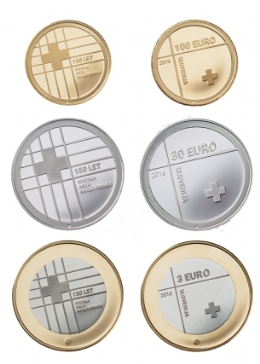 The Bank of Slovenia has prepared 3€ bi-coloured collector coin (proof quality) issued to mark the 150th anniversary of the Red Cross in Slovenia:

The list of Banka Slovenije's numismatic products and their availability as well as their price can be found at the following web page.