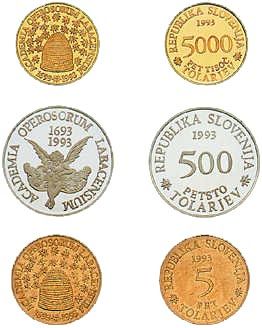 The greatness of a nation can be appreciated through the history of its culture. True, often we do not know the names of many of those who made history, with the result that they quite unintentionally disappear from our memory. Nevertheless, much of what we now take for granted could have never been fulfilled had not certain events taken place which represent milestones in the forming of the Slovene national consciousness.

The Academia Operosorum Labacensium is undoubtedly an institution that is fully deserving of our esteem. It was founded in 1693 as an association of 23 hard-working scientists, most of whom were of Slovene descent. From the beginning its purpose was to organise scientific work in the fields of law, medicine, philosophy and theology. The members of the Academia adopted the Latin name "apes" (bees) and the academic tag "Nobis atque aliis - operosi".

Every year they would organise an annual meeting, as well as four other academic meetings, where the results of scientific research would be discussed. The newly-founded library became an important centre of activity of the "Operosi". At the time of its greatest prosperity, around 1714, it was an international association of 42 members from Carniola and the countries of central Austria assembled under the patronage of the bishop Franz Karl von Kaunitz. The Academia fell into decline in the summer of 1725. It was revived in 1781, thanks to the efforts of Slovene members of the Enlightenment. Unfortunately, it was only active for another 20 years or so and declined again because of the different outlooks of its members. Nevertheless, the fruits of the Academia´s work were not lost and were reflected in many different fields of art, transforming Ljubljana into a flourishing baroque town. Spurred on by the "Operosi", the Academy of Music was established in Ljubljana in 1701.

The Academia Operosorum Labacensium is the predecessor of the present The Slovenian Academy of Sciences and Arts .

In commemoration of the establishment of Slovene scientific and academic work, the Republic of Slovenia issued three coins. The coins reproduce various motifs connected with the Academia Operosorum Labacensium: