Press release - Banks need greater customer diversification in terms of their specifics, both in resolving non-performing claims and in lending

The Governing Board of the Bank of Slovenia discussed the January 2016 Financial Stability Review* and the Monthly information on bank operations for January 2016.

Over the last year and a half, economic development has provided some stimulus for the recovery of the real sector and improvement of prospects for the financial sector. The stabilisation of the situation in the banking system is continuing. Economic recovery is having a favourable effect on the financial position of companies and their creditworthiness. Following years of concerted debt repayment, in many lines of business the high indebtedness of companies returned to the level before the start of rapid growth in financial leveraging. In other lines of business and segments of the economy, the level of indebtedness remains high. An important component in reviving the credit cycle will be an improvement in the structure of financing, including through growth in capital and not just a reduction of debt.

Greater caution has been noted among banks in lending to small and medium-sized enterprises (SMEs), as reflected in the growing difference in interest mark-ups compared to large enterprises.Concentrated in this group of enterprises is a considerable portion of the non-performing portfolios of banks (more than 40%), but this involves a very heterogeneous group of customers. For this reason banks need greater customer diversification in terms of their specifics, both in resolving non-performing claims and in lending. A differentiated approach is also needed for customers that have easier access to external markets and are more sensitive to the competitive conditions abroad.

Identification of the right opportunities for financing would additionally contribute to increasing the healthy portion of the portfolio and improving its quality. Banks are principally promoting lending to households, with a modest relaxation of lending standards and more favourable loan terms. The revival of movement in the real estate market, alongside a halt to the years of declining real estate prices, points to buyers taking the view that conditions are better now for buying property and we may therefore expect livelier growth in this market.

The latest monthly data show that the dynamic of reduced lending to non-financial companies is slowing down, but the contraction in lending is still intense (-13.7% year on year in November 2015). Growth in lending to households showed a minimal boost in November, owing to growth in housing loans, while the contraction in consumer loans has eased. Data for November 2015 also indicate an improvement in the quality of the lending portfolio; the share of classified claims more than 90 days in arrears fell by 0.5 percentage points from October, to 10.3% of the total classified claims of banks.

The persistently high share of non-performing claims in bank balance sheets represents an important factor that contributes to the maintenance of high lending standards. A possible easing of standards and more favourable lending terms should only be enjoyed by companies whose loans would contribute to raising the quality of the entire bank portfolio.

Although there has been a continued reduction in non-performing claims, both in absolute and relative terms, credit risk remains relatively high. The favourable effects of economic growth through higher company profitability and increased capacity to repay debt are contributing to the slower growth of new claims in arrears over 90 days, as well as to the higher rate of transition from non-performing to performing claims. Through restructuring and an increased scope of write-offs, banks are more actively managing the non-performing portion of their portfolio. Despite the favourable trends in the economy, the greater volume and proportion of non-performing loans persists among SMEs and foreign entities. The recently adopted guidelines for managing non-performing claims against SMEs should serve to guide the managements of commercial banks in a thorough restructuring of this portion of the portfolio.

The high proportion of non-performing claims entails a greater credit risk where it is combined with low coverage of claims by impairments and with low coverage of non-impaired claims by capital. In the Slovenian banking system, both coverage indicators are at a relatively high level, both in terms of historical value and compared to other countries of the euro area. The intensive formation of impairments and provisions in previous years, which temporarily contributed to high losses, increased the stability of the banking system and reduced the risk of substantial credit risk losses in the future. Yet the high share of non- performing loans, despite the extensive coverage by impairments, is reducing the capacity of banks to generate income.

The capital adequacy achieved following the latest recapitalisations by the government has provided banks with increased resilience in the event of major shocks. In 2015 capital adequacy grew additionally through the creation of internal capital owing to a positive business performance. In the face of low or falling lending activity and low interest rates, the generation of profit – and thereby capital – is limited. For this reason, an important part in maintaining capital adequacy is played by optimal use of existing capital. Here there are still individual banks that are not achieving appropriate levels, both in capital adequacy and in coverage of non-impaired non-performing claims.

The higher quality of the portfolio owing to lower costs of impairment and provisions is having a favourable influence on bank profitability, but income risk nevertheless remains at a relatively high level. The profitability of the non-impaired portion of non-performing claims is markedly lower than the rest of the portfolio, which is forcing banks to seek higher returns from other investments. The low and falling interest rates, the reducing interest spread at the same time as a reduction in interest-yielding assets and liabilities – the latter owing to a shortening of the maturity of sources of financing – are contributing to the persistence of income risk into the future. The banks themselves are also contributing to the maintenance of low interest rates through the placement of excess liquidity on the market, including in less profitable investments. In seeking greater returns, the banks are directing funds into longer-term investments with very low interest rates. Through the extension of average maturity of investments and a reduction in the maturity of sources, the sizeable volume of secondary liquidity is becoming increasingly important. With these described trends, the banks are becoming more exposed to both interest rate and income risk, and in the case of riskier investments, to credit risk, too. The profitability of banks has also been negatively impacted by the growing burden on banks of regulatory and reporting requirements, which increase operating costs.

Data for January-November 2015 indicate that banks generated pre-tax profits of EUR 255 million. This solid performance was brought about principally through impairment and provisioning costs, which were two-thirds lower than in the same period of 2014.

After several years of debt repayment by banks, the financial dependence on the wholesale markets has fallen considerably, while the maturity structure of the remainder of debt falling due is more favourable than in previous years. High surplus liquidity and availability of liquidity sources via non-standard ECB measures have had a favourable effect on the low risk of financing. The share of non-bank sector deposits is increasing in the structure of financing, but given the falling interest rates their maturity structure is being shortened in favour of sight deposits. The predominant share of company deposits, at 70%, is sight deposits, which also account for over half the household deposits. The stability of sight deposits, especially those of households, is relatively high, but there are no reliable forecasts of future trends in a context of historically low interest rates. With the latest trends in the real estate market predicting growth in property investment, and the macroeconomic forecasts of greater household consumption, there is increasing likelihood of the redirection of a portion of deposits from savings to investment and consumption. The positive economic growth will also serve to increase the probability of a partial redirecting of company deposits towards investment and reviving demand for loans. However, banks will be prepared to follow up with loan offers only with concomitant increase in own funds or capital in company balance sheets. The greater share of capital in company balance sheets indicates not just a more stable structure of financing, but also greater capacity of the corporate sector in managing assumed business risk.

Owing to the extended maturity of investments and the predominant share of loans approved with variable interest rates, greater caution is needed in assessing the ability of debtors to service debts in conditions of a probable growth in interest rates. In seeking returns, the question of where banks will direct surplus liquidity gains importance. This applies especially in the sense of whether they would not, in the desire to diversify and reduce the risk of concentration, increase their exposure to interest rate risk, or to risks that are poorly understood and managed, even more. 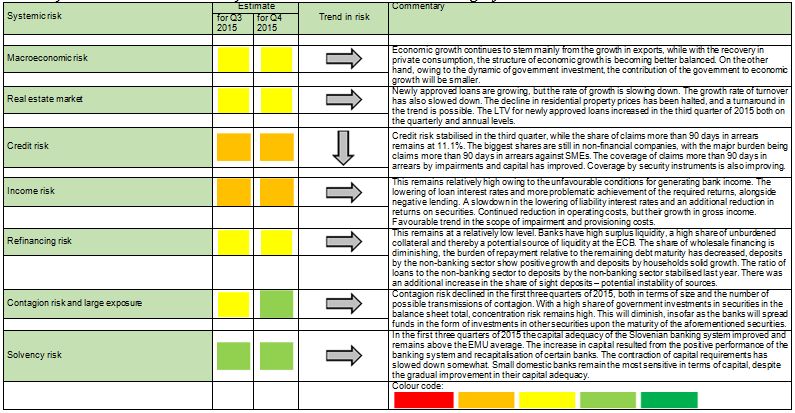 *Publication now issued twice a year, in January instead of publication Stability of the Slovenian Banking System. English version is not available yet.