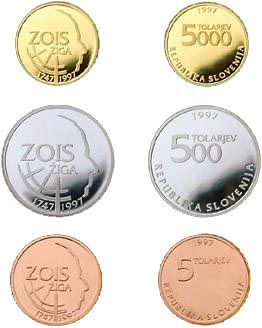 Ziga Zois, Baron Edelstein, was born on 23 November 1747 in Trieste . His father was a merchant who moved from Italy to Ljubljana, while his mother came from a famous Slovene ironworking family. He inherited his father’s estates, manors and ironworks in Carniola and was one of the richest men in the region.

Ziga Zois was a man of many parts. As well as being a patron and mentor he played an important role in providing, via his connections, a constant flow of information between Slovenia and abroad.

He was a central figure in the literary and cultural arena of the Slovene national revival that began at the end of the 18th century. After 1780 an enlightened circle of cultural figures began to gather around him. The circle included those prominent in the literary rebirth of the nation and authors of scholarly and technical literature. Zois encouraged Jurij Japelj and Blaz Kumerdej to collect material for a dictionary and start compiling a scientific grammar. At Zois’s suggestion Anton Tomaz Linhart began writing in Slovene, thus helping establish the use of Slovene in the theatre. Zois also helped Linhart in his writing of the first critical history of the Slovenes. Under Zois’s mentorship, Valentin Vodnik developed into the first Slovene poet. Jernej Kopitar, Zois’s secretary and the librarian of his extensive, modern library, was given the support that enabled him to write the first scientific grammar of Slovene.

Zois was also a natural scientist. He built up an extensive collection of minerals, now housed in the Natural History Museum in Ljubljana. A previously unknown mineral found on Svinska Planina was named after him. As a zoologist, he was among the first to breed the "human fish" (proteus anguinus), as well as to study and write about it. He was also interested in mining and ironworking. He introduced new organization and technology to ironworking and invented a blasting device for furnaces.

He built a wheelchair which allowed him to move around despite a serious illness. He remained active right up until his death on 10 November 1819.

In commemoration of the 250th anniversary of Ziga Zois’s birth, the Republic of Slovenia is issuing three commemorative coins depicting Zois’s life and work. The coins show a part of the wheel of the wheelchair which enabled him to continue his work despite his illness. The rim section and spokes depict Zois’s circle. The main spoke, which divides the two dates, means "From Ziga Zois to Today". It is possible to see, in the profile of the portrait, the shape of the River Sava, whose navigability Zois endeavoured to improve.