The building where the head office of The Bank of Slovenia is situated today is constructed in a modern style. Its construction lasted from 1920 to 1923 and was designed by Czech architect Franc Krasny. The order for construction was issued on 10th of July 1920. The main entrance of the building is emphasised by four telamonnes which support the balcony of the first floor.

The telamonnes were created by the sculptor Franc Berneker. The telamonnes are stylised and have athletic bodies without excessive muscles. As the repeating elements they integrate very well with the architecture of the building.

History of the Banka Slovenije building

In line with the first project prepared in 1918, LJUBLJANSKA KREDITNA BANKA (LKB) planned to construct buildings on the entire ground of the former Austrian military supply warehouse (Militär-Verpflegungsmagazin). This included the block between Tyrševa (now Slovenska Cesta) and Beethovnova Ulica, and between Kidričeva (now Štefanova Ulica) and Cankarjeva Ulica. The project was never realised: it was overruled by the majority of the municipal council in disfavour of the modern bank.

Between 1919 and 1923, LKB therefore constructed only a five-storey office building at the crossing of Slovenska Cesta and Cankarjeva Ulica, and a five-storey residential building for the employees on Beethovnova Ulica (then No.16, now 14). The office building is constructed in modernistic style.
LKB was tightly linked with the Živnostenska Banka in Prague: all the leading staff, directors and clerks were of Czech nationality. This may be the reason why the office building was designed by the Czech architect František Krasny from Prague. The formal construction decision was issued on 10 July 1920. The main entrance is decorated by four telamones supporting the first-floor balcony. The telamones were sculpted by the Slovenian sculptor Franc Berneker (1874-1932). Berneker shaped the telamones in a generic manner, as athletic bodies without excessive muscles, well in line with the architecture of the building. The location of the entrance door has been moved and the original entrance door replaced many times, last time in 2007. 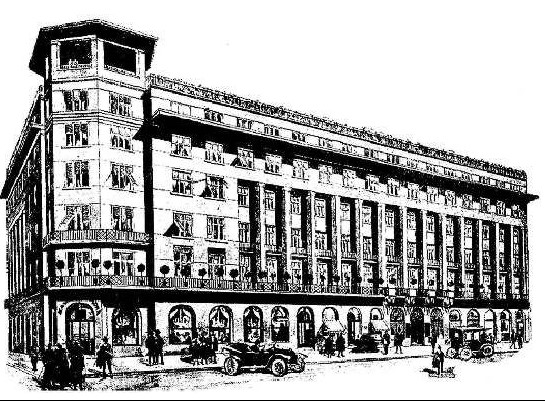 The electric wiring and the elevators were supplied by the Viennese companies Siemens and Stigler. Gustav Nebenfürer was appointed bank supervisor and later the building manager.The residential building at Beethovnova Ulica (10 three-room and 10 two-room apartments) was constructed in 1921 and the apartments ready for the bank staff to move in. In 1923 the bank moved from the former office building at the corner of Stritarjeva Ulica and Mestni Trg to the new premises at Slovenska Cesta.

LKB only took up a small portion of the big new building having as much as three house numbers at the time: Tyrševa 1a and 1b (now Slovenska Cesta 35) and Cankarjeva 2 (as is the case today).

In addition to the bank counters on the ground floor of the middle section, and the vaults in the basement, the bank also took up the offices on the first floor of the wing at Slovenska Cesta and those in the backtyard wing.

The ground floor at the crossing of Slovenska Cesta and Cankarjeva Ulica was taken up by café EMONA, run by Messrs. Dolničar and Presker. The two also owned flats on the fifth floor of the wing on Cankarjeva Ulica.

The café had a room on the first floor, the four remaining upper floors of the wing at Cankarjeva Ulica housed the bank staff and some private apartments (the then General Director Tykač; Director Krofta, Dr. Kobal; Adlešič-Popovič; Director Švinger; manager Nebenführer; Požar; Selšek). Part of the first floor was also taken up by the company DENTAL-DEPOT. On the fifth floor there were the laundry and the laundry-drying rooms.
At Slovenska Cesta 35, the ground floor housed the café, the PRELOG stationery store and a tobacconist; the second floor housed the offices of the ŠERBAN and JERAS trading companies; there were apartments on the third and the fourth floor; there were studios for the bank staff and the housekeeper apartment on the fifth floor.

At today's service entrance of the bank at Slovenska Cesta 35 (former Titova Cesta 13), the first floor housed the LKB and the timber merchant FRIEDRICH; the second floor housed ZDRUŽENE PAPIRNICE VEVČE – GORIČANE – MEDVODE, GORJANA and PAPIRLES (United Pulp and Paper Producers) and DRUŠTVO INDUSTRIJCEV (Manufacturers' Association); the third floor housed the Ing. Bleiweis ELEKTRO company, the milliner Sarkova, apartments of Maire and Dr Kunst; the fourth floor housed the apartment of the manager Sbrizaj and that of Prof. Dr Hribar; on the fifth floor there were studios and the housekeeper appartment.

Therefore, before World War II, the building was only partly taken up by the LKB, and its main part by offices, some company-owned and some private apartments. 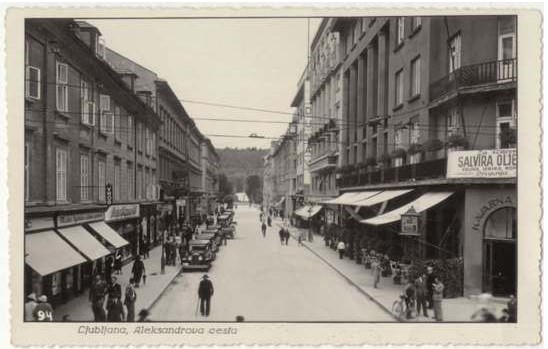 After World War II significant changes took place. Small private companies and shops moved out of the building. LKB was still in the building but was undergoing the liquidation process. INDUSTRIJSKA BANKA (Industrial Bank) moved in. DENARNI ZAVOD SLOVENIJE (Financial Institution of Slovenia) initially operated at the premises of the former Kreditni Zavod (Credit Institution) at Prešernova, now Čopova Ulica. The first years after the end of the war saw many companies change their premises.

Following LKB liquidation, its former premises were taken up by the CENTRALA NARODNE BANKE (National Bank Head Office). The bank also took up the offices on the upper floors, the fourth floor included.

MLADINSKA KNJIGA (publishing house) and TANJUG (news agency) moved into the ground floor at Slovenska Cesta 35. The entire second floor of the building was taken up by the GENERALNA DIREKCIJA INDUSTRIJE PAPIRJA (Pulp and Paper Industry General Management). The FOTO-SEKCIJA TISKOVNEGA URADA (news agency photo section) took up the fourth floor of the wing at Cankarjeva Ulica.

Subsequently all these companies moved out and Narodna Banka (the National Bank) took up all of the office building, the premises of the former café Emona included.

The DELAVSKO USLUŽBENSKA RESTAVRACIJA (Restaurant for Workers and Clerks) of Narodna Banka was set up in the basement room of the former restaurant Café Emona on the initiative of the bank trade union branch organisation in cooperation of the bank management on 1 October 1948. By that time the number of staff had increased to around 600. The staff restaurant solved what was an issue of high priority at the time: the staff was offered good food in a clean and pleasant environment at a reasonable, subsidized price. It was managed by a Board, composed of representatives of the Board of Management of the bank, of the trade union branch organisation and of boarder representatives. This part of the building is now taken up by the fashion-clothing retailer ZARA.

The building was administered by Centrala Narodne Banke until June 1949. Based on the order No. 2055 dated 10 May 1949 issued by the People’s Committee of District No.4 in Ljubljana, a Council of Tenants was established to take over.

The Council of Tenants (later the House Council) was composed of five members, elected on the occasion of the tenant assembly. It administered and managed the building in cooperation with the Board of Management of the bank until the end of 1954. Pursuant to the decision No.T8-583/2-54 dated 5 November 1954 issued by the Council for Residential Affairs of the People's City Council, and following the annulment of the decision on inclusion of this building into the apartment collective, Narodna Banka became the sole administrator and manager of the building again.

The range and the variety of activities Narodna Banka engaged in kept changing throughout the period up to 1991. Banka Slovenije was established on 25 June 1991. In a short time the newly established institution successfully took over all the functions of the central bank of the independent Republic of Slovenia and introduced the Slovenian own currency, the Slovenian tolar, on 8 October 1991. On 1 January 2007 Slovenia joined the EMU and introduced the Euro.

The Banka Slovenije office building has always been well kept. In the recent years the whole exterior of the building, the entrance hall, the main ground-level hall, the staircase and some of the management rooms were renovated and refurbished in cooperation with the Municipality of Ljubljana and the Institute for Protection of Cultural Heritage of Slovenia.

With the renovation in 2016 the central lobby was expanded and converted into a multipurpose space.

The building of the Bank of Slovenia is protected by cultural protection and entered in the register of real estate of the cultural heritage of the EŠD 20032 Ljubljana - Slovenska palača 35. 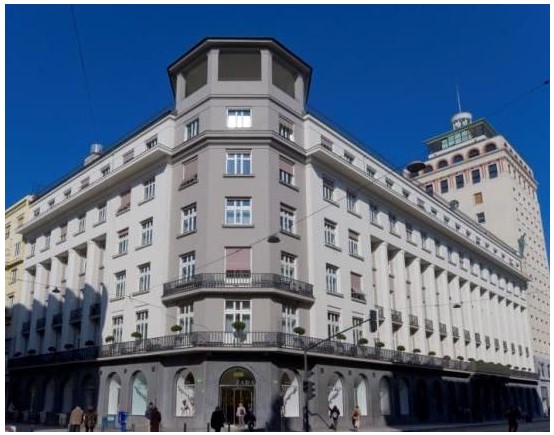